After an Earlier Misstep, a Minutely Planned Raid 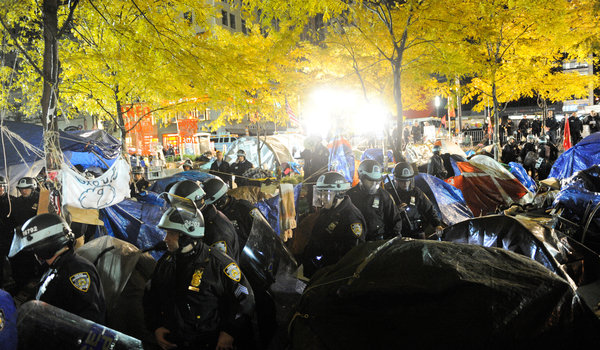 By AL BAKER and JOSEPH GOLDSTEIN

It began with the rumble of Emergency Service Unit trucks moving along Broadway through Lower Manhattan. The trucks took up positions on either side of the one-square-block Zuccotti Park. Then, as about 220 protesters camped in their tightly packed tents, most of them asleep, powerful klieg lights on the trucks snapped on with a “Whoosh!” Now, it was as bright as day, even though it was 1 a.m.

At that moment, the booming voices of police officers on van-mounted speakers echoed through the neighborhood.

Bleary-eyed protesters emerged from their tents as community affairs officers weaved through the park, handing out leaflets titled, “Notice of Requirement to Remove Property From Zuccotti Park.” The message was clear: get rid of all tents, sleeping bags and tarps. It was the same message booming from the loudspeakers.

And so began the minutely planned, almost military-style operation to remove those who had been camping in downtown Manhattan for two months.

Hundreds of officers were involved. The overnight hours of Monday into Tuesday were chosen because it was believed the park would be at its emptiest, the police said. The operation was kept secret from all but a few high-ranking officers, with others initially being told that they were embarking on an exercise when they set out on Monday evening.

Police Commissioner Raymond W. Kelly, squinting in the glare of his department’s bright lights, was at the center of the operation, his presence underscoring how the operation was fraught with challenges for the Police Department. There could be no repeat of episodes in recent weeks, like the pepper-spraying of protesters, that violated department rules and created a firestorm of public sympathy for the squatters.

The operation came after weeks of planning.

Police officials watched how the occupations in other cities played out, often with much less tolerance by officers for the social movement — and with greater degrees of aggressive force. Police commanders in New York held conference calls with colleagues in other cities. They increased so-called disorder training — counterterrorism measures that involve moving large numbers of police officers quickly — to focus on Lower Manhattan.

The last training session was on Monday night, on the Manhattan side of the East River. The orders to move into Zuccotti Park came down at the “last minute,” said someone familiar with the orders, which referred only to the assignment as “an exercise.”

The operation involved officers from an array of police units, including boroughwide task forces — scores of mobile officers who are usually used to flood high-crime neighborhoods.

“There were several hundred offices involved,” Mr. Kelly said in a news conference on Tuesday morning at City Hall. “We had contingency plans to address the situation in the park for quite a while. They’ve been developed, they’ve been honed by our managers, and so it was something that was just a question of implementing.”

Mr. Kelly said that choosing 1 a.m. gave the police the element of surprise, but that it was also a time when the fewest protesters would be there. Many people, he said, have been coming and going from the park, like commuters. “It was appropriate to do it when the smallest number of people were in the park,” he said. “So that’s why we did it after midnight.”

He added: “From an operational sense, they went well. The park was cleared in relatively short order.”

The show of force, the lights and the loud voices seemed to cow many protesters. As the community affairs officers moved into the park in their light-blue windbreakers, many protesters simply gathered their belongings and left.

No tents were touched until 1:45 a.m., the police said, giving the protesters time to gather up their belongings. Other teams of officers were seen gathering on the perimeter to move in if arrests were needed in the park.

Also, any reporters in the park were asked to leave for their safety, said Paul J. Browne, the Police Department’s chief spokesman. Television camera trucks were lined up along Church Street, along the park’s western border, and they were able to captured images from there, he said.

As the police moved west through the dense tangle of protesters’ personal belongings, including luggage and plastic lawn and leaf bags stuffed with clothing, crews from the Sanitation Department followed, scooping up what was left behind.

Some protesters who refused to move were dragged out, the images appearing on the Internet soon after. A core group of protesters took up positions near the encampment’s kitchen area, near the center of the park. These people, too, were given a chance to leave and avoid arrest, Mr. Browne said, but they opted to stay. Some made a barrier, and the police moved in to methodically arrest them.

About 10 people in the epicenter of the encampment locked themselves together by their arms. And two people chained themselves to trees, Mr. Kelly said. Emergency service officers were called in to cut the locks.

No arrests were made in the park until about 3 a.m., Mr. Kelly said. The clearing operation was complete about 75 minutes later, the police said.

Mr. Browne said about 142 people were arrested in the park. Most of the arrests were for “disorderly conduct and resisting arrest,” he said.

As the police were trying to clear Zuccotti, another contingent set up positions along the perimeter, preparing themselves along the eastern side of Broadway, between Liberty and Cedar Streets, in case they had to move in.

Barricades were set up at Cortlandt Street, a block north of the park, and at Pine Street, a block south. From those positions, the police were seen expanding the perimeter even farther outward from Zuccotti Park. At one point, several officer, many with shields, were seen pushing people farther out. About 28 people were on the northern perimeter.

Some of the rowdiest action of the night took place south of the park. Around 5 a.m., south of Pine Street, one protester was seen jumping on the hood of a police car, and others were seen releasing the air from the tires of a police van. At one point, a piece of plywood came flying from the crowd.

One police officer, from the Bronx task force, had difficulty breathing and was taken to Bellevue Hospital Center, Mr. Browne said. A protester complained of back pain and was taken to another hospital, he said. One woman, who was on crutches, expressed her resistance by simply sitting down, so she was carried out, he said.