MARCY, N.Y.—As convicted hedge-fund manager Raj Rajaratnam gets ready to enter the prison system, L. Dennis Kozlowski, a poster child for the last wave of corporate scandals, is hoping he'll soon get out. 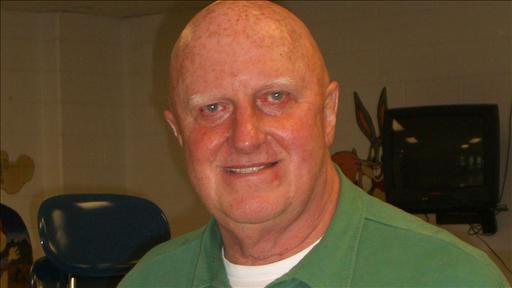 In a wide-ranging exclusive prison interview, former Tyco International CEO L. Dennis Kozlowski described his next job following his possible parole in April and missteps that caused his 2005 conviction. Joann Lublin has details on The News Hub.

The former chief executive of Tyco International Ltd. was found guilty in 2005 of looting his employer and sentenced to as much as a quarter century behind bars. Now, he's suing New York state to win work release and awaiting his first parole hearing in April.

Meanwhile, Mr. Kozlowski looks out—across razor wire made by Tyco—at a world where the stumbling economy and scorn heaped on big business have a familiar feel.

Once one of America's highest paid CEOs, the 64-year-old felon acknowledges he got "piggy" when it came to his pay. And he says he shares the outrage over corporate greed expressed by the Occupy Wall Street protesters, many of whom wonder why the recent financial crisis didn't send as many executives to prison as the scandals of a decade ago. "I understand their frustration," Mr. Kozlowski said in an interview in a visitors' room here at the Mid-State Correctional Facility.

The former executive, who pulled in a pay package worth more than $105 million in fiscal 2000, criticized ailing financial firms for paying out sizable executive bonuses after they were helped by taxpayer bailouts. "That's indefensible," he said.

Mr. Kozlowski also discussed his post-prison plans, his meetings with General Electric Co. CEO Jeff Immelt about possibly combining their companies, and the missteps that led him to prison.

Mr. Kozlowski was found guilty in June 2005 on 22 of 23 counts, including grand larceny, conspiracy and securities fraud, stemming from giant bonuses and other improper compensation he got as Tyco's CEO.

He received a sentence of 8 1/3 years to 25 years, compared with 25 years for former WorldCom CEO Bernard J. Ebbers and 24 for former Enron President Jeffrey Skilling. In seeking the maximum sentence, Assistant District Attorney Owen Heimer called Mr. Kozlowski's crimes "unprecedented" and said he made Tyco a "symbol of kleptocratic management."

Mr. Kozlowski hopes to take a work-release job with Access Technologies Group Inc., a small company in New Canaan, Conn., whose services include job-search training for ex-convicts. But New York state has turned down his request for work release four times.

He's suing to overturn the decision and chafes that Mark H. Swartz, the former Tyco finance chief convicted of similar crimes, already has such a job. The New York Department of Corrections and Community Supervision confirmed that Mr. Swartz started a Manhattan work-release assignment in late September but declined to comment on Mr. Kozlowski's request. An attorney for Mr. Swartz declined to comment. 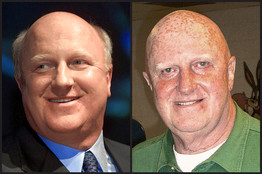 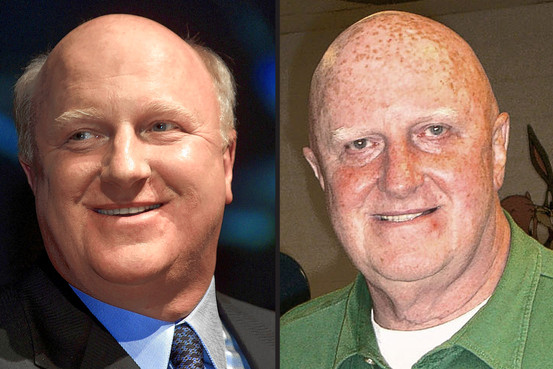 Dennis Kozlowski, shown on the left in 2001 near the height of his success at Tyco, and, right, in a visitors' room Monday at the Mid-State Correctional Facility where he has been since 2006.

If his suit fails, Mr. Kozlowski will become eligible for parole in August, with a first hearing in April. Lucy Baney, who heads Access, said Mr. Kozlowski can take his senior-management post at the company during work release or on parole.

Mr. Kozlowski said he believes he was treated more harshly than other convicted former executives. "My sentence is the same as people who brought down Enron and WorldCom," he said. While those companies disappeared, "Tyco investors have enjoyed living off a lot of the assets that were accumulated by the management team that I had in place."

As Tyco chief, Mr. Kozlowski lived well. His opulent, company-funded apartment, with its $6,000 shower curtain, became synonymous with corporate excess. He said it was also where he and GE's Mr. Immelt conferred in November 2001 and January 2002. An investment banker arranged the meetings for the CEOs "to talk about the possibility of putting Tyco and GE together," Mr. Kozlowski said.

The chats about the unlikely combination never got beyond the exploratory stage, Mr. Kozlowski said. A GE spokesman declined to comment.

Mr. Kozlowski pursued a freewheeling acquisition strategy during the 1990s, estimating he completed nearly 200 takeovers. Less aggressive growth would have been a wiser course, he said. "We were running too fast."

The deposed Tyco chief also wishes he had chosen more seasoned people for his top team. "The lack of documentation was the key" in his conviction for taking unauthorized compensation, he said. "We needed somebody to rein us in and say all these things need better documentation."

Mr. Kozlowski's lack of remorse bothers Wendy Lane, a Tyco director from April 2000 to March 2003. "It continues to amaze me that he doesn't accept responsibility for his crimes," Ms. Lane said Thursday.

Tyco is still fighting in court to claw back money doled out to Mr. Kozlowski. The company had sought disgorgement of at least $505.8 million, and a judge last year ordered him to forfeit compensation and benefits awarded over nearly seven years starting in September 1995. Paul Fitzhenry, a Tyco spokesman, said the precise figure the company has sought is under seal. Mr. Kozlowski failed in his attempt to appeal the ruling immediately.

When he headed Tyco, Mr. Kozlowski owned three pricey houses, two aircraft and the classic racing yacht Endeavor. He sold everything except his Florida residence, he said, to cover the $90 million in restitution he paid to Tyco and a $70 million fine levied by New York state.

In prison, the former CEO has worked his way up from serving food and cleaning bathroom floors to picking up, doing and delivering laundry. He makes 80 cents a day. "There's no pay for performance here," he joked, clad in green fatigues and nearly 25 pounds lighter than during his Tyco days.

His 8-by-10-foot cell, previously used for solitary confinement, contains a steel shelf, mattress, sink and toilet, and 24/7 lights, which makes sleep difficult. "The food is awful," he said. Mr. Kozlowski is allowed to venture outside briefly each day to a small caged area, but he avoids it because other inmates' cigarette smoke bothers him.

Once he leaves prison and joins Access, the former CEO hopes to set up a manufacturing facility that would mainly employ former convicts and military veterans. He said he has sounded out several former Tyco colleagues and others about investing in a New York-area plant.What would it produce? "Inexpensive shower curtains," he quipped.

This copy is for your personal, non-commercial use only. Distribution and use of this material are governed by our Subscriber Agreement and by copyright law. For non-personal use or to order multiple copies, please contact Dow Jones Reprints at 1-800-843-0008 or visit