Though there is no cause more urgent or just than ours, even we have to acknowledge there are certain overarching catastrophes which the whole world stops to mourn while searching for the strength to go on.  This may be one of those tragic times.

BY JENNIFER GARCIA AND MIKE FLEEMAN 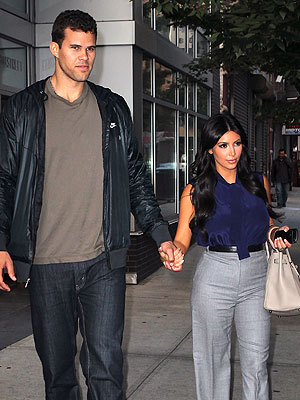 That was fast! Kim Kardashian filed for divorce Monday just 72 days after tying the knot with Kris Humphries in a lavish ceremony that was taped for her reality show. "I've spoken to her briefly and she says she's sad and got caught up in all that was going on," Ryan Seacreast, who produces her show, said on his KIIS-FM radio program Monday morning. Kardashian, 31, lists the date of separation as today, Oct. 31, 2011, and cites the usual "irreconcilable differences," according to her Los Angeles Superior Court filing. She also says the couple has a prenuptial agreement and she doesn't want to pay spousal support to Humphries. A source close to Kardashian tells PEOPLE that she "wanted a fairy tale" but that the couple found "the pressure of the TV show just isn't what they could have handled." The filing comes after weeks of speculation of trouble in their brief marriage.
Kardashian told PEOPLE living in New York City with her sister Kourtney, her boyfriend Scott Disick and their baby was "not ideal" for the newlyweds. For Halloween, Kardashian, dressed as Poison Ivy, hosted a party solo, telling PEOPLE that her husband was not around because she was headed to Australia this week. "Something I really prepared Kris for [was] to let him know that no matter what we do, there's going to be rumors," she told PEOPLE. "It used to really upset me and now I don't even think about it."